Where: Panora/Fish Tank Gallery
When: The exhibition starts Thursday June 9 at 19:00
and will stay up until the middle of August (possibly a bit longer)

Two exhibitions at once, with international comics art to celebrate the release of two new volumes of CBA! From comics about the special situation brought by the pandemic to comics that break up their own form to such a level that they begin to question what comics as an art form is.

At the opening on June 9 at 19, you can witness a live painting/music performance with Grønvall.Haverholm. 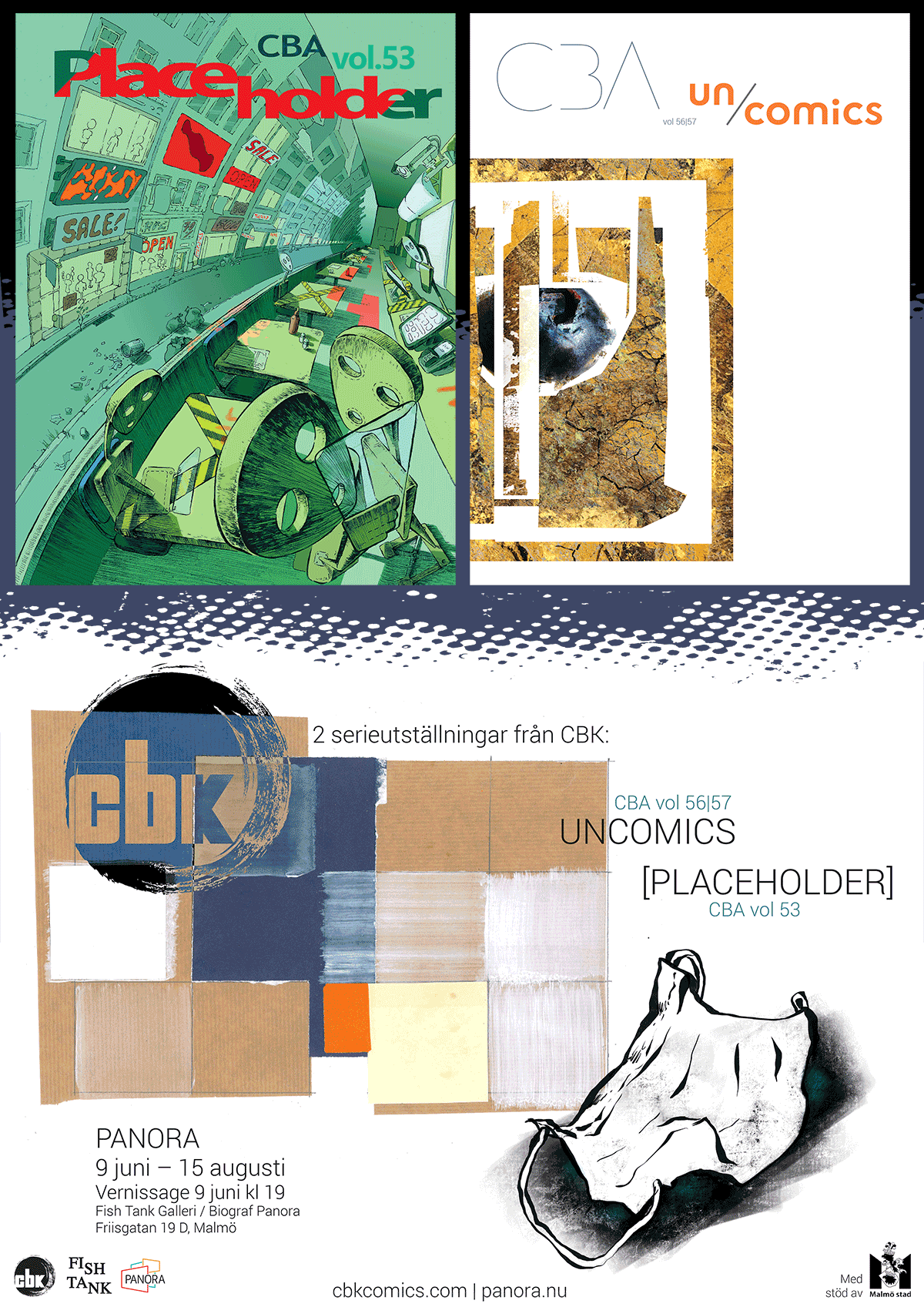 Exhibition: [PLACEHOLDER] (CBA vol 53)
The pandemic was supposed to have a deadline, most of us agreed on a year but it lasted much longer. What happens when the world is paused for an indefinite time? What does this do to our experience of our existence? How do we replace our routines? We’re waiting, and in our wait, we imitate the “real” we hope will soon return. Like placeholders in our own lives.
Available now! Buy it here


Exhibition: UNCOMICS (CBA vol 56|57)
Abstract art emerged in the early 20th century as a reaction to the complexities and — just as often — atrocities of modern society. Meanwhile, embedded in the entertainment industry, comics evolved primarily in terms of disposable spectacle or literary ambition; stylized pictures in service of story.
Comics scholar Jan Baetens noted a decade ago that narrative “melts in the air when [abstraction] walks in”. Living in a time of hyperlinked, multi-threaded and immersive narrative, we suggest instead that abstraction opens up to non-linear, ambiguous understandings of comics. Understandings so contradictory in terms that we need a new phrase to describe them — we give you: uncomics.
An artistic field where contemporary art and comics inform each other. Where the absence of sequence encourages the reader to investigate the picture plane(s) in any direction and order, becoming an active co-creator in the process. A space outside the tedious limitations of story where images both abstract and suggestive interact. Comics, at last, as a visual art form.
Available now! Buy it here


Performance: Grønvall.Haverholm
Grønvall.Haverholm is an improvisational, crossover-media act combining live music and drawing with appropriate amplification – distortion and back projection.
Allan Grønvall (bass/guitars) has a varied musical background in the Danish metal underground of the 90s. In Grønvall.Haverholm he’s taken the DIY-mentality and lo-fi focus from back then to a new level.
Allan Haverholm (charcoal/paints) is a visual artist and editor. Moving from graphic novels via musical expressions in comics onto his current, abstract expressionist work, his work remains deeply moored in comics.
Giving concerts since early 2015, the duo have joined their individual fortés in avant-garde comics and extreme music into a unique, creative performance.

This double exhibition is produced with support from Malmö Kulturnämnd.