Koshk Comics (Egypt) are arranging a release event for CBA vol 44: LORE, with an exhibition on the Folklore theme, July 12, starting at 7 pm at Haward gallery in Cairo.

Koshk Comics collaborated with us on this volume by extending our call for submissions especially through their network of creators in North Africa and the Middle East, to create a journey through the world Folklore by bringing together comic artists from different countries to produce graphic stories which was published in vol 44 of CBA.

In this version of the release exhibition they will also add some extra comics that weren’t in the actual book, such as Tunisian comic artist Seif Eddine Nechi, the founder of Soubia, who will also be present at the event. Seif has won the Cairo Comix prize for the best graphic story in 2017 for his story (bombyx) which also won the Mahmoud Kahil prize in 2017.
The second guest at this event is Kalk كلك, the experimental comics quest where they are seeking different types of narratives. Kalk has participated in many exhibitions in Sweden where they have also published two comic stories.

So if you are nearby you should drop in and have a look at this extended version. 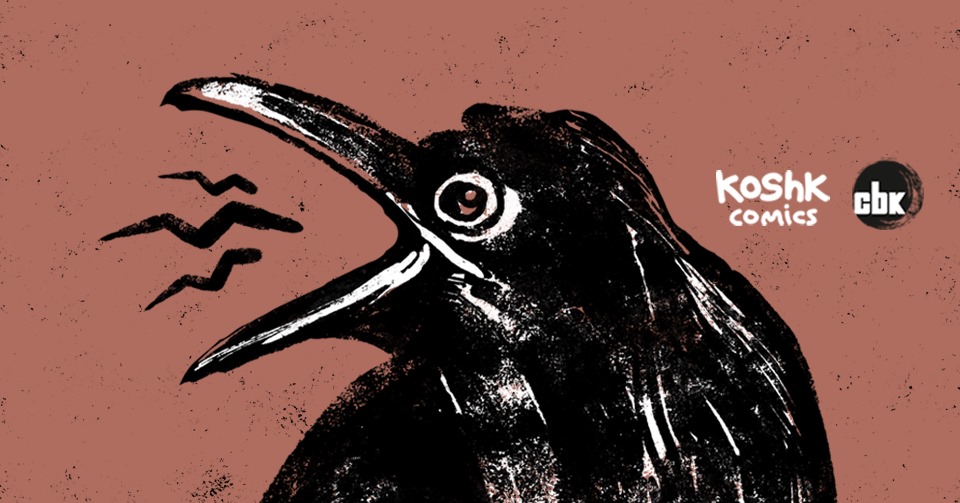 As children, we’ve been told hundreds of frightening stories by our mothers, grandmothers, or even our older siblings.
These stories have been passed through generations to deliver some kind of wisdom or to prevent children from committing stupid things. These stories are like the oral history of our culture.

However, when we grew up and met people from different cultures around the world, we discovered that these stories exist in almost every civilization but forms in different shapes, and may be this is what unites us as human beings, the same fear of darkness, strangers, the unknown fate, or our hidden desires.

It’s always the same story, the story of our feelings as vulnerable creatures trying to control the world by creating monsters and heroes to fight them.

The exhibition will take you on a very unique journey across space and time, where you can discover the common narratives between the human beings, and also how those global modern comic artists look through our heritage.

The exhibition will be available for the audience from 12th until 20th of July.
Koshk (and CBK, if only in spirit) are awaiting all of you on the 12th of July to join our great adventure.

Check the Facebook event for any more news about this event.