Why CBA is anti-racist

This is a personal text, a kind of reflection about CBA, written by Mattias Elftorp, one of the founders of CBK:

To me, CBA is about anti-racism. It’s also about anti-narrowmindedness in general. This may not be apparent for everyone, so let me explain:

When I grew up, in the 1980s and 90s in a small town (about 30 000 inhabitants) on the west coast of Sweden, things were different. And also the same. But I think that my experience of growing up there informs my view of Sweden a lot. Here are some details: You didn’t read comics openly. Comics were for kids or maybe nerds (not sure we had that word yet but if we did it certainly wasn’t positive). Especially superheroes. You know, those that are basically household names now, that everyone are watching in the movies with no shame whatsoever. That was something you bought and read when no one was looking.

Now, I listen to a lot of music all the time. Whenever my computer is running (=almost always) there is something playing. But back then I didn’t listen to music for many years. Because in my circle of friends it wasn’t socially acceptable to listen to anything but the most mainstream stuff that was on the radio (we’re not even talking hiphop here, it was just really boring pop). And I wasn’t interested in that. Then, after the first 9 years of school, I started a new class and found a new friend who introduced me to techno (rave/IDM/ambient/trance/gabber etc) and I found something that I liked. What we were listening to was still frowned upon, but it was ok since I wasn’t alone. I would probably have liked extreme metal as well (and hiphop), but that was still out of reach for me.

It was basically the same with everything. Some subcultures were more ok because there were bigger groups of kids doing it, but I was never any good at skateboarding and I never got into grunge. But mostly, if you weren’t part of the mainstream culture you were regarded as weird. Like: “you’re just enjoying this probably because you want to be special and underneath that surface you actually know that what you do is weird and when you grow up you will probably stop doing that and go back the the natural state of being normal”. That’s how I experienced the general sentiment.

Parallel to this, my parents were helping a family that came from Kosovo. They were Albanians and were not accepted in Kosovo so they had to leave. I don’t know about the details of their situation, I just know that they had a hard time in Kosovo because of their ethnicity, and they also had a hard time getting to stay in Sweden. It was a process that took years before they could relax and really settle down when they got their permit of residence. While another family we also helped were denied and sent away. So I guess I always made that connection, that anything that is out of the ordinary, that doesn’t fit into the Swedish norm, is unwelcome. Be it music, comics or people.

I don’t know how big open racism was in my town. I know there was talk but I hardly ever saw any straight-up neonazis in real life though I guess they were there, I was just too white to really have to notice. But there were these bullshit comments and slurs from “normal people” going around. And of course I saw the institutionalized racism through that family we were helping. And this was in the late 80s, before the migration rules started getting increasingly harsh, which began in 1990. Since then the rules have gotten much worse, quite the opposite of the view that is perpetuated by the far right and often adopted by mainstream media and society. All that talk about “mass immigration” that wasn’t true back then and is even less true now.

So anyway, it wasn’t considered a good thing to have parents from another country and it wasn’t good to take an interest in weird culture (comics, non-pop music, foreign movies). Female wasn’t really good either, now that I think about it, but there were so many of them that they had to at least be tolerated as a group as long as they didn’t try to fart or shit or any other privilege reserved for men. The worst thing you could be, however, was probably homosexual. That was disgusting and probably contagious and dangerous and let’s not even talk about it. Luckily I wasn’t gay. It wasn’t until much later that I tried it out a little bit and found that I could enjoy a cock almost as much as a pussy. But that’s a different story.

Anarchism was something that only existed as one paragraph in the history book that I stumbled upon by mistake because it wasn’t required reading. We learned a lot about national socialism, but nothing about the other end of the political spectrum, except communism of course which was just as bad as nazism. Politically, center/right socialdemocracy with a splash of economic liberalism was the norm. Much like now, except there’s much more privatisation and racism now. And the same rules applied. Don’t be weird. It wasn’t until later when I found out that there was a movement of people who actually believed in anarchism that a new world opened up to me. Another world that actually seemed possible.

Anyway, I think you get the point by now. Anything outside of mainstream Swedish culture (except mainstream US culture, of course) is weird and you should stay away from it or you’re asking for being treated as an outsider. Choosing to be an outsider. “We” don’t understand why, but that’s what you do.

Now I live in Malmö, which is a haven of cultural diversity and acceptance, at least in comparison. The City still does its best to get rid of the Roma beggars, but at least any music is more or less acceptable. Cops ride their horses over people in order to protect nazi manifestations, but at least the anti-nazi demonstrations are much bigger.

Publishing what we do in CBA, to me, is anti-racist. Not necessarily by dealing with racism as a topic, but by publishing non-mainstream comics from many different countries, with different perspectives on things. Weird, experimental comics that break all kinds of conventions even in the form itself. Not that it takes that much to break Swedish conventions. The problem is that what we’re doing can easily be considered art and is therefore easily dismissed. Because art is regarded as something that never tried to be normal in the first place and why take any such thing seriously? Also, art is just art and, like opinions, it has nothing to do with reality.

Once, a bunch of years ago, I was with a large group of people outside the refugee detention centre in Malmö. We were there to stop a deportation of a man from… I don’t even remember from where. The police came to get him. We stood in the way, blocking all entrances. After a while, the cops said: “All right, now you’ve made your statement. You’ve expressed your opinion. Now stand aside and let us do our job”. That hit me on a deep level. We were there to save someone’s life, and they thought we just wanted to express out opinion and then things could go back to repressive normality. Of course we didn’t move. We stayed there all day, hungry, getting burned by the sun, until the guy managed to break a window from the outside and get out. Within minutes he was in a car being driven away from there, to a life in hiding. Maybe eight months later, he got his permit of residency, proving us right.

People here seem to think that opinions is something everyone can have, as long as they don’t interfere with reality. Conversely, they also see them as something harmless, which is why we’re supposed to be so lenient towards racism. Because it’s just an opinion, which anyone is entitled to, and it has nothing to do with real life (and, incidentally, they won’t hurt you as long as you belong to the white mainstream (but who worth considering isn’t white mainstream?)). Except it does. Anything that today is ‘just an opinion’, may tomorrow be the new mainstream, with real-life consequences.

We used to have a slogan in CBK: WE WILL BE THE NEW MAINSTREAM. That never happened and it seems even less likely now. I like the boldness of that statement, but I don’t know if I would have liked to be the mainstream, because anything that is the mainstream runs the risk of being prejudiced towards everything else, and also of being blind to its own position. Like white mainstream people feeling threatened by such modest claims as “Black lives matter”. Which really isn’t an attack on anything except racism (and, specifically, racist police brutality) and if you’re a white mainstream person the only threat you’re under is that you may need to start seeing black people as your equals. And frankly, it’d be about time.

Maybe I’m wrong. Maybe times have changed even outside the bigger cities. Maybe people are more open-minded now, in general? I hope so. But it wasn’t many years ago I heard in the news about people in some smaller town in Sweden throwing rocks at a woman in hijab, presumably to force her to be less oppressed, or at least less weird and more normal. And that kind of rhetoric also seems to be gaining ground, alongside the political correctness saying that everyone should be treated with respect, no matter what identity they fit into (or don’t fit into), at least on the internet.

But there’s still need for anti-racism and things that can validate non-mainstream culture. Such as an anthology of art comics. Not as a solution to any of these problems, but as one voice among many, one facet out of a multitude.

/Mattias Elftorp, co-founder and long-time editor of CBA
Malmö, May 2017 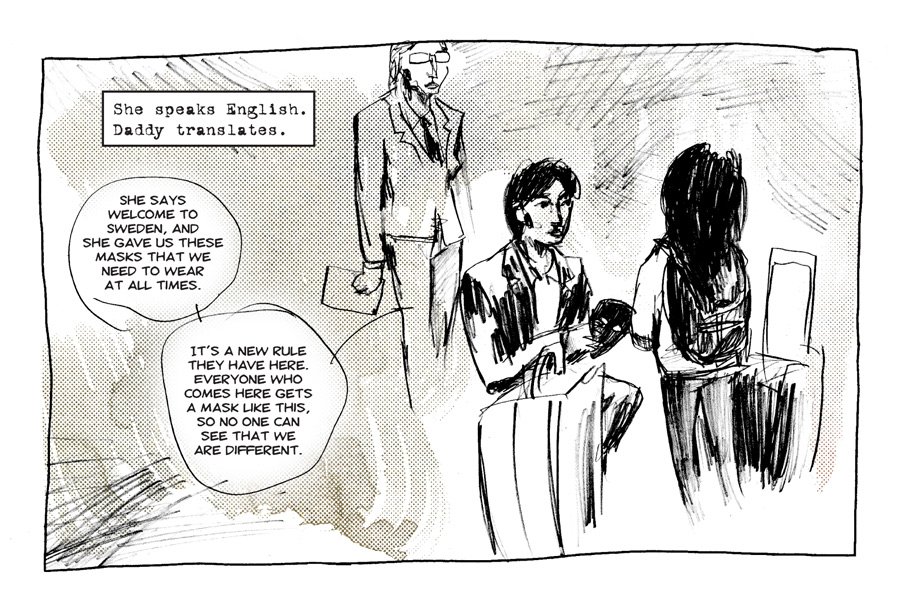